Recently, we took a trip to our favourite Scottish city, Edinburgh (Sorry Glasgow…) to get ourselves in the mood for the fast approaching festive season. We ate a lot, walked a lot, did some touristy things and drank some dodgy local cider. We’ve put together a bit of a guide to give you some ideas of where to go if you’re thinking of having a short city break before the end of the year.

Although most of the time, public transport is a bit of a pain in the arse, we forget how lucky we are to have Lime Street in the city with its national rail links (As I write this, my train from Euston is cancelled…). Admittedly, there’s no direct link from Liverpool to Scotland, but it’s an easy enough route with one change at Preston.

The train tickets vary depending on when you book them, but if you get them early enough, you can snap a return trip for 2 for about £60. This would be even cheaper if you have a railcard, discount codes etc. On that note, if you’re a pair and often travel together via the train, it would be worth getting yourself a ‘Two Together Railcard’. The cards are 30 quid but will save you a third on all journeys for a year. It’ll soon pay for itself!

Edinburgh has some incredible, high end hotels which can costs hundreds per night, and it also has some lovely budget hotels too. You can be rest assured, you’ll find something to your taste. We would advise booking it as far in as advance as possible as if you don’t, you could be paying for one night in Edinburgh the same you would pay for a weekend in Amsterdam!

We stayed in Motel One, just a stone’s throw away from Edinburgh Waverly train station and pretty much central between the old and new town. Ideal if you’re wanting to do plenty of exploring. The hotel is set in a converted listed building so, despite it not being the Balmoral, it has plenty of historic features (on the outside at least). The rooms all vary in size depending on what you’re budget is. We struck lucky and landed one at the front which meant we had a cracking view of the city.

Rooms at Motel One start from about £50 but realistically, you’re looking at three times that if you’re heading there at the weekend.

As well as the breath-taking scenery in Edinburgh, it’s not all hills and whiskey. There is plenty of other exciting things on offer. After all, it is the Scottish capital!

We started our trip with a visit to Edinburgh Castle. It’s the city’s most iconic landmark and as you can imagine, the busiest, so  we wanted to go see what it was all about before heading elsewhere. Located at the top of the ‘Royal Mile’, (which

is actually 1.8 miles long…) Edinburgh Castle offers guests a chance to learn about the history of Scotland and also gives guests a glance at the royal jewels. If, like us, you didn’t want to queue to go in, you can just take in the surroundings. With panoramic views all around the city, this is definitely one to put on your to do list.

Next on our list, and just a stone’s throw away from the castle was Camera Obscura. This is one of the most random places I’ve been to when going on a city break and I have to say, it was probably the highlight of the trip. Camera obscura and the world of illusions.

What even is it? It’s a variety of exhibits showcasing what can be done with lights, illusions and an open mind. At the top of the tower, there is the Camera Obscura show, a 15 minute experience which offers you the chance to see Edinburgh in a slightly different angle. This has been going for over 150 years so you know they’re doing something right!

Next stop was the Scottish Whiskey Experience which is a also a stone’s throw away from the Castle. Admittedly, we did the tour because it’s whiskey and Scotland but to our surprise, it was actually very interesting. It starts with a short ride which takes you through the

process of making whiskey and then onto a guided walking tour. Not only do you learn about how whiskey is made, but also where and how different locations throughout the Scottish isles create their own distinct flavours. The tour ends with a tasting session and if whiskey isn’t for you, you can switch it up for the second Scottish drink, Irn Bru.

Next up on our list is Escape Reality Edinburgh. The newly opened escape room game is located just outside of the city centre (about a 15 minute walk from the gallery) and challenges you to escape from their movie themed rooms in 60 minutes or less using the clues and puzzles provided. We were given a chance to try and escape Jungala, the Jumanji inspired room, and because of our bad maths, we didn’t make it out in time (62 minutes). We’re still not over it. There are a lot of escape room style placeopening up in cities up and down the UK at the minute and Escape reality have realised that and gone the extra mile with their challenges to make them more realistic and more visual. It might not be unique to Edinburgh, but if you’ve got some time free, we would strongly recommend adding this to your to do list. Prices start at around £15pp.

As you probably know, we love our food. Whenever we visit somewhere different, we always look to try something new, especially independent bars and restaurants. 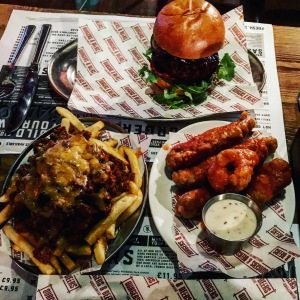 On Saturday evening, we took a trip to Beers & Burgers Grillhouse which has been recommended to us as the best burger joint in the city. We’re pleased to announce that it lived up to the hype! We went all out and got burgers, loaded fries and monkey fingers (chicken in chip shop batter is the best way to describe these bad boys). 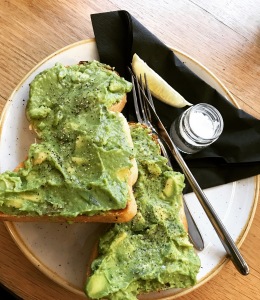 The burgers were both stacked high with toppings. I went for the ‘Dirty South’ which was loaded with pulled pork, bbq sauce, pickles and onions. We also had the ‘Big Fat Greek’ which as you can probably expect, was packed with fetta and olives. Both came on a toasted brioche bun and both were cooked perfectly. In a nut shell, if we were back in Edinburgh, we’d take a trip back here.

The next day, still recovering from our food comas, we had breakfast at a little place called the Edinburgh Press Club. A coffee specialist offering guests a small selection of breakfasts and cakes. If you’re in the area, give them a try. The avo on toast was boss!!!

Every year, Edinburgh goes all out at Christmas and there are festive events going on all over the city. There are Christmas markets in both the old town and new, there is a fair, an ice rink and plenty of other attractions to keep everyone happy. The city has plenty of bars and restaurants to suit all taste buds and budgets so you’ll not be short of choice. 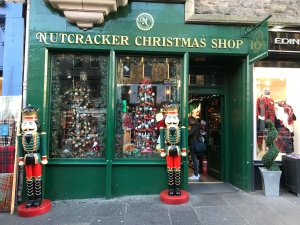 Be sure to check out the Nutcracker Christmas shop located towards the bottom of the Royal Mile. It’s open all year round and will put a smile on your face the moment you walk in. It’s even more special this time of year because you can actually let yourself get excited about the fat man coming!